3top HD
Home Technology what is a blade server 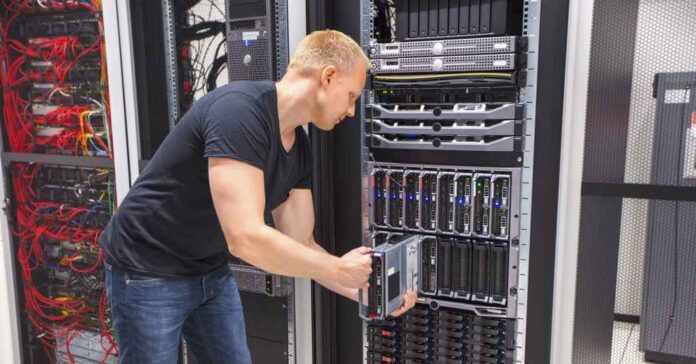 what is a blade server? The best way to answer that question is to compare it to a traditional low-profile dual-processor 1U (one rack unit) rack-mount server. An Intel blade server chassis houses up to 14 dual Xeon servers or 7 Quad Xeon Servers in just 7U of data center rack space.

Because the individual blade servers are all housed in that shared blade chassis, the cost per server reduces with each blade added. This is because the resources of the chassis (power, cooling, cabling, etc.) are shared, and only the core cost of the server is added to the TCO each time a new blade server is added. Compare this to the old method of adding a whole new 1U or 2U rack-mount server for each new application, and savings are obvious. In fact, on average the break-even cost point for a new server is 6.5 blades compared to full 1U Dual Xeon servers and 1.8 blades for 2U Quad Xeon servers.

These are the main ingredients of a traditional 1U server: Ethernet controllers, hard-disk controller and drivers, main logic board with chipset, memory, two processors, support hardware (including board mount power supplies), cooling fans and other components that take up space, generate heat and cost a lot.

Even with all these infrastructure components, the traditional rack-mount server does not contribute to processing, storage or connectivity.

The basics of a blade server include no support hardware, power supplies, or cooling fans. Those ingredients are all included in a box called the chassis. The shared chassis provides built-in network connectivity, including switches that reduce cabling, and a centralized management system for the blade server.

With these ingredients in the shared chassis, the server – the processors, memory, logic board, storage and connectivity – becomes much smaller in size and perfect to place in a centralized data center.

The blade server slides into a bay in the chassis and plugs into a mid- or backplane, sharing power, fans, floppy drives, switches, and ports with other blade servers. The benefits of the blade server include eliminating using hundreds of cables strung through racks just to add and remove servers. With switches and power units shared, space is freed up, so blade servers also enable higher density with greater ease.

Intel conducted an extensive study in 2004 into the potential benefits of blade servers – which were only three years in the making at the time – and determined that blade servers lower acquisition costs and operational costs for deployment, troubleshooting and repair.

Intel’s total cost of ownership (TCO) analysis indicated potential reductions of 10 to 20 percent for acquisition costs, 3.8 to 10.6 percent for deployment and troubleshooting costs, , and 8.5 to 25.3 percent for facilities costs.

Let’s break these categories down further:

Blade servers provide these components as part of an integrated system, unlike rack servers. When comparing the server solutions, blade servers offer the best value. When one adds up the cost of the individual components needed to build a traditional rack system and then compare that to the price of an integrated blade system with the same features and functionality, the savings become apparent.

When you compare server solutions on this basis, blade servers provide the most value for a business.

Deployment costs: We’ll give you a hint as to which is easier to deploy between the blade server and the rack-mount server. Blade servers typically use 87 percent less cabling than rack servers.

Studies show that adding servers to a blade environment is easier and takes less time than expanding a typical rack environment. Adding a blade server can take as little as 30 minutes, while adding a comparable rack server can take as much as 12 hours. And the old adage is true: Time is money.

A traditional rack server requires a certain amount of assembly, including unpacking the server, installing rails, mounting the server into the rack which may require more than one person due to the size and weight, and then connect all the cables. With a blade server, the blade simply slides into the chassis. If a large number of servers is to be installed, this can add up to many hours of time and many resources saved.

Troubleshooting: If a component failure occurs in a blade server, advanced diagnostics can lead the technician directly to the failing part, thus restoring full redundancy sooner rather than later.

Some components will even alert a systems management processor of impending failure, hours or days before the failure occurs.

How to Find Someone on Spotify With Phone Number